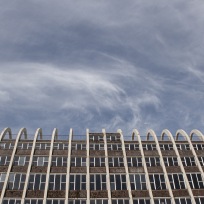 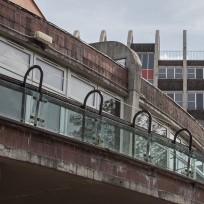 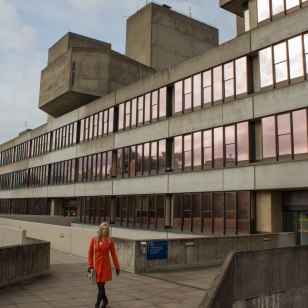 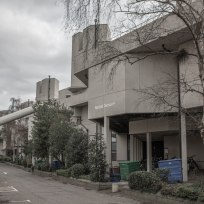 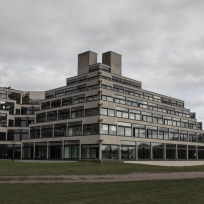 Lasdun’s University of East Anglia is a true megastructure, designed to include student accommodation, a teaching block of offices, labs and lecture theatres, a library, and the students’ union building. The teaching block is a long, winding ribbon with a strong horizontal emphasis and appealing copper hued windows. The horizontal is broken up by Lasdun’s characteristic roof furniture – concrete housed vents and lift shafts jutting dramatically above the roofline. To the east of the site you can find the library and students’ union building, an arrangements of boxes that continue the horizontal thread. Running the length of this collection of buildings and facing south is the student accommodation, the famous ziggurats. Magnificent low rise stepped pyramids of concrete and glass. The height of the buildings fall, step by step, to the ground and where the buildings end an area of grassland continues the downward slope to a small lake in front of the River Yare. Raised walkways – one of my favourite architectural features – connect the back of the ziggurats with the rest of the complex. The campus is, in the true sense of the word, awesome. A miniature brutalist city sat next to a beautiful patch of green. The Sainsbury gallery to the west of the site is a bit intrusive, but the university has got to make the most of its estate I suppose. Plus it’s worth a wander round once you’ve finished looking at the architecture.
Privacy isn’t something you get much of living in the ziggurats, the park is open to the public and during my visit there were plenty of dog walkers and students – not to mention brutalist photo bloggers – gawping in through the floor to ceiling windows. The price you pay for living in this masterpiece I guess. Overall, a must visit for brutalist fans. If you can’t explore in person have a look at it on Google maps with the 3d option. 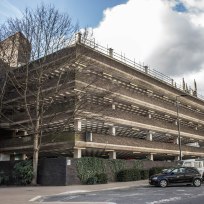 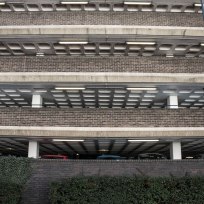 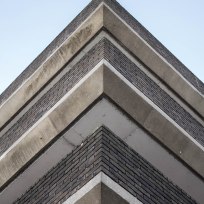 The new assembly rooms stand on the site of the original Assembly Rooms, which were destroyed by a fire in 1963. The car park of the replacement was itself damaged in a major fire in March 2014 and the venue has remained closed ever since. The ultimate fate of the building remains unclear. There is talk of a replacement, but replacements don’t come cheap. They’ll probably just leave it mothballed for a decade or two.

The building itself consists of a multi-story car park (where the fire was, which remains open), a reception area and two large halls (which are closed. Smoke damage apparently). The façade of the building facing the market place has some interesting features. My favourite is the square tourist information centre towards the east end of the building (photo #7), which juts out pleasingly into the marketplace giving a bit of variety . Along the length of the rest of the façade a protruding first floor overhangs a row of commercial units on the ground floor. The glazed protrusion has irregularly spaced mullions, which break it up quite nicely. This interesting feature, however, just seems stuck onto the hulking brick box that forms the body of this part of the structure. It reminds me of the way that Mr Potato Head’s features are stuck onto a bland potato head with little or no integration.

There’s a small courtyard in the join between the halls and the car park, but this is dominated by the car park entrance and the cars entering. It could have been nicer.  The car park is standard fare, concrete framed with brick half walls.

It’s a difficult building to love. With it being located in my home town and with my passion for concrete I’ve probably tried harder than most. But it would be a shame to demolish it. Considering the standard of Derby’s recent architecture I dread to think what a replacement would look like. The Westfield Centre (now the Intu centre) really is an abomination. The bus station is basically just a big aluminium shed, with some kind of glass shard stuck on one corner to try to distract from that fact.

For all its faults, I think the best option would be to spend some cash on giving it an overhaul inside and out. Obviously I don’t mean the kind of overhaul that involves cladding it in plastic or something awful like that, but something that respects the original vision and the original materials. 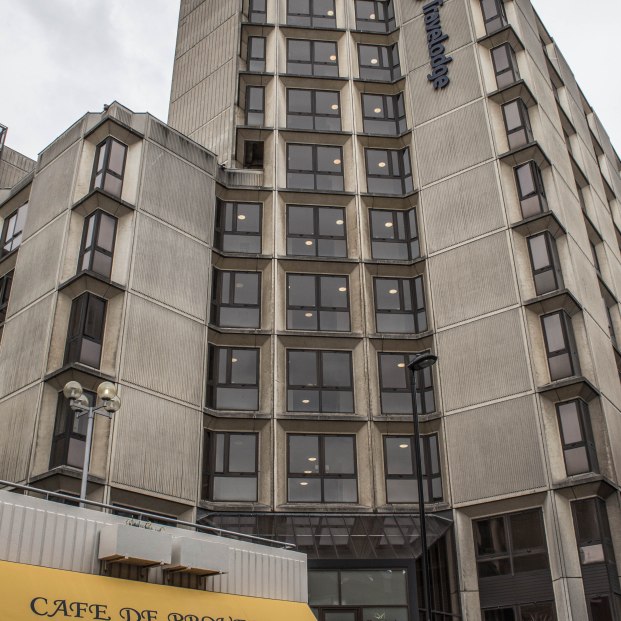 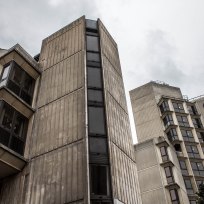 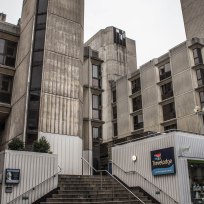 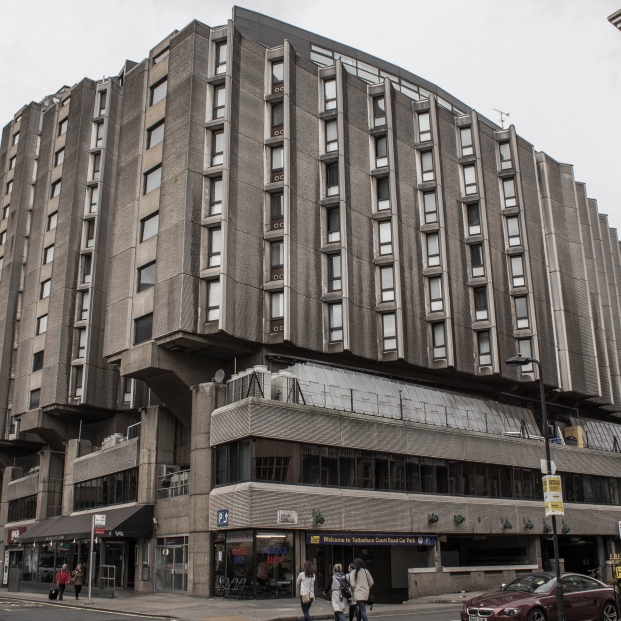 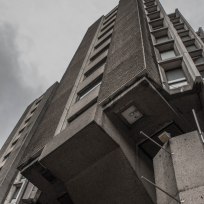 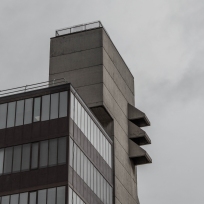 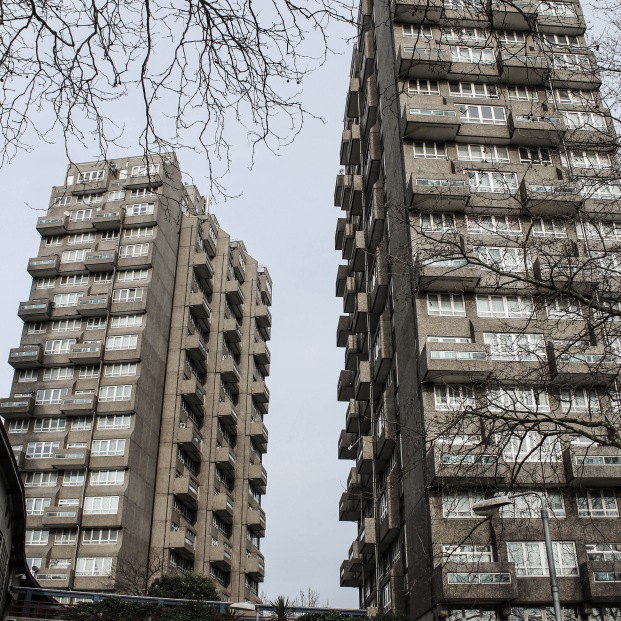 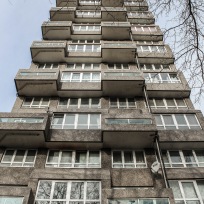 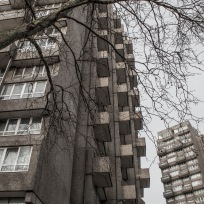 A lovely little building south of the river, a short distance from two green spaces, and within sight of the Imperial War Museum. The building itself is an irregular arrangement of three blocks and two connecting spaces, each of varying heights. The blocks are three units wide and arranged in echelon formation. Many of the housing units protrude from the blocks, adding further to the irregularity and giving the whole a pleasingly haphazard appearance. The units are concrete framed with large windows and white infill panels, which I’m not usually a fan of, but they really work here despite inevitably looking a little grubby. The complex contains a pharmacy and a nice Turkish restaurant, which I can highly recommend, both for the location and the food. 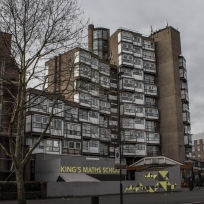 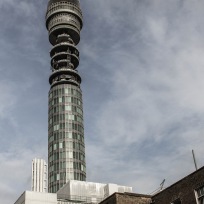