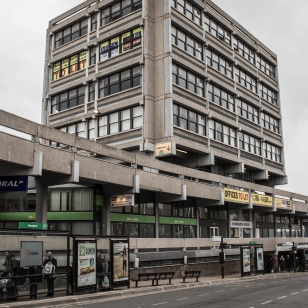 A tidy little mixed development in the centre of York, Stonebow house consists of a long row of shops and cafes with an almost cuboid office block rising above. The shop fronts are set back and raised above street level allowing you to window shop or take an alfresco coffee at the Jorvik Cafe while removed from the bustle of the streets and protected from the unpredictable northern weather. Indeed, I was forced to take shelter myself as it began to hail while I was waiting for an annoying van to move.

60s concrete buildings aren’t generally well loved, but this one especially seems to wind people up, most likely because of its proximity to the historic York Shambles. But as I sat there sipping my coffee on a concrete veranda, it was clear to me that the architecture of Stonebow house is as representative of a period of history as The Shambles themselves are. For this reason it should be preserved and in time it may also become a cherished symbol of a bygone era.