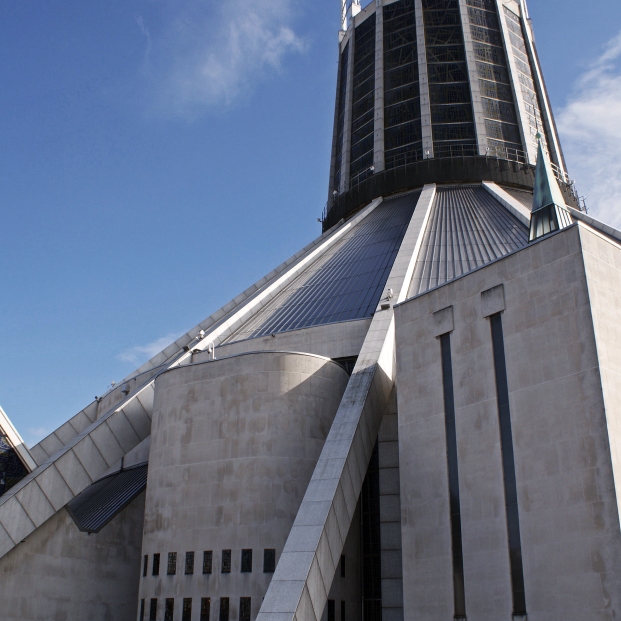 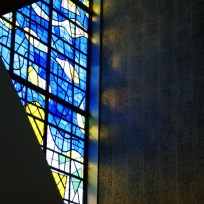 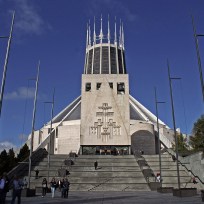 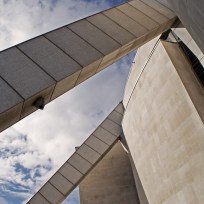 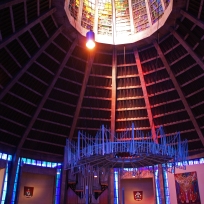 Edward Luytens was originally commissioned to build Liverpool’s new Catholic Cathedral in 1930. His epic design looked like the love child of the Hagia Sofia and St Pauls. By 1953 the architect had died, the second world war had happened, costs had spiraled out of control, and the design was abandoned with only the crypt completed. A new competition was launched in 1959 and the commission was awarded to Frederick Gibberd.

Completed in 1967, Gibberd’s building is circular in plan, topped by a large conical roof. Crowning the roof is a huge stained glass lantern complete with pointed steel prongs pointing toward the heavens. Flying buttresses run down from the concrete ring supporting the lantern and take the weight all the way to the ground. Apparently these were suggested by the engineers and not part of the original design. Surrounding the main circular space are several geometrically shaped mini chapels, which provide a nice variety around the base of the exterior and some interesting extra spaces inside. The lantern in addition to a multitude of other stained windows of varying shapes and sizes bathe the interior, and especially the centrally placed altar, in multicoloured light. I imagine the services here are quite spectacular, if you are into that kind of thing.

I’m not generally a fan of modernist churches, perhaps because I don’t really associate churches with the modern world. Despite this, I really like this building. The colourful interior contrasts beautifully with the grey exterior. It has an appealing solidity about it, something which the best churches built in more traditional styles have. And I think this is emphasised by the buttresses which I feel actually improve Gibberd’s original design.